The ECODEAL CIRVER landfill is currently made up of three cells, two of which were built over the 8 years of ECODEAL’s existence. The landfill has a phased operation, which means that the landfill cells are built over several years of the company's activity, taking into account the needs and quantities managed.

The landfill cells are used for the disposal of solid waste that has been subject to prior treatment from the Stabilisation unit or directly from the outside and meets the landfill admission criteria for hazardous waste, as set out in Decree-Law no. 183/2009 of August 10th.

The underlying layer of the landfill cell is made up of a silty-clayey geological unit with very low permeability and a thickness of up to 20m. In addition, a natural waterproofing complement was applied with the application of a reinforcement layer of the waterproofing with a thickness of 0.5m of a clayey nature selected from the excavation itself, associated with a bentonite geocomposite under the entire bottom surface of the deposition cell (bottom and slopes). This additional barrier, together with the natural barrier, satisfies the conditions required by the current legislation. 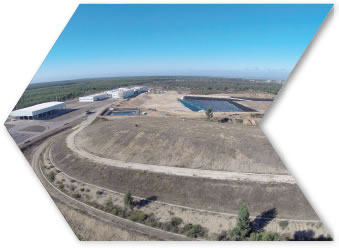 DATA ON THE CELL 2 CONSTRUCTION PROJECT.

Cell 2 is divided in three distinct operating alveoli (Alveoli 1, 2 and 3) to separate “clean water” and leachate, thus minimising the production of latter. Physically, this separation is made by building interior separation dikes and, hydraulically, by building independent drainages in each well. It is still possible to minimise the leachate since this constructive solution allows partial waterproofing of the alveoli.